I sit on the bleachers and can feel the sweat building under my legs as the sun beats down.  The eagle looking gentlemen on my right seems to know why we are waiting.  His uniform appears bedazzled.  I can’t decide what is more impressive: all the medals on his chest or all the braiding on his shoulders.  He is in the midst of a conversation with the woman in front of him.  She also seems to know what to expect.  But I’m clueless, as is Mike, seated just a few feet away.  The bleachers are set up behind a sea of empty seats I presume are reserved for the Plebes.  The woman in front of me proudly shares that her brother currently teaches at the Academy.  I am immediately taken with her East Coast style, elegant yet “summery”.  She follows up by telling me that both her husband and son graduated from here.  The Eagle turns to me and asks what made my son pick the Academy.  I politely respond that my “daughter” chose it because she wanted to outrank my husband and his dad who were both enlisted Marines.  His face quickly turns bright red, a huge contrast from his sparkling white uniform.  He stumbles over his words as he tries to apologize, like he insulted me somehow, making evident that in some military training he’s been told to be gender sensitive.

To reassure him that I am not offended, I place my hand on his shoulder but instead I touch the braids on his uniform.  I sense by his reaction that I am wrong. He seems perturbed yet neither moves nor says a word. I am mortified. It is obvious by his “bling” that his entire life has been dedicated to military service and his son was now following in his proud tradition. We both sit there embarrassed in our own right and finally find some common ground.  We giggle about how our kids are about to embark on the same journey.

How could that be possible?  My kid and his kid?  Really??

Cassandra sits a few seats from me.  She glances my way, a bit red in the face for some strange reason and turns to continue her conversation with a naval officer in dress uniform.  I think he is a captain, or maybe an admiral.  In our section of the bleachers there are at least four other high-ranking officers: two naval Commanders, a “full-bird” Marine colonel, and even an Army lieutenant colonel.  Throughout the rest of the bleachers, military officers are dispersed in similar frequencies.  I was enlisted in the Marines, like my father, my uncle, my aunt, and my cousin before me.  I still cannot escape the uneasy feeling of being in the presence of so much “brass” even though I am in civilian clothes and haven’t been in uniform for years.

Bancroft Hall stands before us as a monolith, as if the largest dormitory in the country, maybe the world, were itself at the position of attention. There is a light breeze, not enough to negate the heat, but sufficient to keep the national colors waving. It looks like the building, still at attention, is saluting. A few hours earlier, our daughter marched into the backside of Bancroft Hall.  Parents and families were directed to Tecumseh Court, located at the front of Bancroft and encircled on three sides by the massive building.  Two sets of stairs decoratively circle up to the main door in a formal fashion.  There are also two large doorways on each opposing side of the building that opens up into the court, both dwarfed by the massive door in the center of the building.  The court is also massive, large enough to accommodate the bleachers where we are located, that close off the open end of the court, as well as two huge sections of impossibly white chairs that have been set up in perfectly aligned rows. There are walkways that fit four people abreast flanking the seats on either side in addition to a walkway of equal size down the center. Two sections, maybe 30 to 35 rows, twenty chairs per row, I quickly estimate about 1300 to 1400 seats fit comfortably in the court.

At precisely the designated moment, all three entrances of Bancroft Hall open.

Upper classmen, in summer white uniforms march through the doors and out into the court followed by individual platoons of about 40 plebes each.  The small units march with a precision that suggests they have been here longer then the mere 6 or 7 hours since they first arrived on campus.  While the plebes take their seats, upper classmen stand in the outer walkways at the position of attention, facing their young charges.  The plebes fill the same row of both sections in the courtyard simultaneously, even though they have entered from opposite sides of Bancroft.   Once an entire row is filled, every plebe in the row faces the front at the same time and, only after receiving orders from their leaders, sit down and remain seated at the position of attention.

Every single plebe wears the exact same “White Works” uniform, white dungarees and a white mesh belt with a silver buckle sporting the “Fidelity NA Obedience”.  They also wear the traditional navy cap just like Popeye’s but with a Navy blue stripe. The seats are almost full before we finally glimpse our own child exiting out of the door on our left. 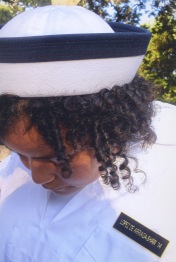 She is always easy to pick out of a crowd because she has distinctively curly hair, a by-product of my being Black and Cassandra being Mexican.  What’s more, the campus is approximately 80% men and 20% women making her particularly easy to identify amongst the sea of young men.

Once the court is completely filled with plebes, there is a welcoming speech by the Superintendent followed by short speeches from a few others.  At the conclusion of their comments, the plebes are ordered to rise.  1400 plebes stand up in unison.  The Commandant instructs them to raise their right hands.  They do so, again in unison and repeat the following oath:

So help me God.

The ceremony ends when two navy jets do a fly over. They bank right over the courtyard, tipping their wings to salute the plebes below.  The Commandant states simply the name and rank of the two pilots.  He closes saying, “Class of (x and y), United States Naval Academy” and releases the plebes to their families for a final farewell.

our daughter bravely takes it all in, motivated to begin this grand adventure, and apparently not phased at all by the pomp and circumstance or the fact that parents will depart shortly.  Others are less composed.  There are several young men holding back tears as we escort our daughter to where her platoon will form up.  A Marine Corps gunnery sergeant bellows orders to form up and the plebes fall in with their leaders at the helm.  In a few minutes, 1400 plebes are again in organized platoons, four across, and ten to twelve rows deep.  They are called to attention, receive orders, and march towards Bancroft Hall.    In no less then 5 minutes, the entire plebe class of 2014 disappears into Bancroft Hall.  The massive doors in the center of Bancroft Hall are slammed behind them, echoing across Tecumseh Court.  The message is clear:  Induction Day is over.

Cassandra and I quietly make our way towards the front gate.  We have some time before we need to catch our flight so we head to dinner to debrief on the days’ events. Clearly, the United Sates Naval Academy is no ordinary college.  At universities across the nation, parents take their children to school, help move all the personal things like computers, luggage, and bedding into a dorm room.  If they are lucky, maybe they meet a new roommate and treat them all, child and roommates whose parents have already departed, to one last free meal.  They can linger on even longer by heading to the nearest Target or Wal-Mart to purchase all those last necessities that were too cumbersome to haul from home.

None of this happens when a parent drops a child off at the Naval Academy.  I expect it is no different at any of the other service academies as well.  Young men and women arrive on campus representing each of the fifty states, all its territories, as well as a few additional nations.  They enter with nothing more then the clothes on their backs and a few essentials on their person.  At the time we read the list of what to bring on Induction Day, we were a bit excited at how little we needed to get together.  Now that we are here, and our daughter has disappeared for the summer, we both find ourselves wishing we had a reason to stay, a last meal or even an errant trip to Target to overspend on minutia to clutter her dorm room.  We are never allowed to see the inside of Bancroft Hall.

Cassandra and I push past the normal emotions any parent feels when dropping their first child off at school and focus on the experience itself.  We were equally impressed by the beauty of the Yard, as the Naval Academy is fondly known, the pageantry of the ceremony, the fly over, and the sheer number of high-ranking officers who were doing the same thing we were doing, simply dropping a child off at college.

We laughed as Cassandra recounted her experience with the officer at the ceremony even though I am just as horrified that she touched his uniform.  We spend the better part of the evening sharing our observations of the days’ events and decide we are ready to head back to the hotel.  As we wait for our check, we look at each other and, almost in the same breadth; we ask each other, “How in the hell did we get here?”

We continue to get up from the table and glance at one another smiling. We both know exactly how we got here…